“The future of Myanmar solemnly depends on the youth for they are the hope for the future to fight against the military junta.”

On February 1st, 2021, the country of Myanmar was forcibly taken in a coup by the country’s military; leader Aung San Suu Kyi was detained along with fellow party members of the National League for Democracy. The coup comes as a result of rising tensions concerning the national elections. Since then civilians have begun protesting online and throughout the streets of Myanmar. In particular, the youth of Myanmar has taken to spreading awareness and advocating for democracy on social media. Many activists online and in-person have remained anonymous from fear of retaliation by the military.

As a youth living in Myanmar, how has the coup affected the youth?

“Right after Daw Aung San Suu Kyi was detained by the coup, the country has gone upside down. The military coup took away our rights by threatening against us by using weapons towards innocent people. I feel so upset to see innocent lives getting killed and tortured brutally especially the young protesters and children. All we want is our freedom, our democracy. Waking up to the news people dying from protesting and getting shot really breaks my heart.

Also, they shut down all the mobile networks to lose access to the internet, to connect to the world and let the world hear our voices. Most of the parents are quite concerned about their children’s future. Moreover, some of the young people who act as defense team during protest even have to go for a hideout because the soldiers are on a watch to capture them and beat them up violently in the jail. Almost every time, they would either take forcefully and steal the people’s belongings (money, jewelries, etc.) by using their guns to threaten the citizens and shoot them if they disobey their orders. They even shoot at the drivers who are minding their own business for no reason. These juntas are also a huge threat to young women because of their misogynistic behaviors and multiple sexual assaults which is very traumatic and horrible.

Additionally, the military itself provide very poor education system to young people in Myanmar Government Schools to the point where they won’t even let them use the proper computer. They gave little to no support of proper education to the people, therefore, resulting in lack of critical thinking, creativity and analytical skills. They make the students study by heart without the need to understand the lessons properly for the sake of getting good grades.

Honestly, all of us feel somehow hopeless and miserable from time to time due to lack of help from the international associations. We feel physically and emotionally drained from the terrifying experiences of not being able to feel safe, feeling insecure at night and not knowing what the future holds. However, we try to stay optimistic by encouraging one another to keep going forward no matter what.”

As many are taking to social media and protesting, what outcomes does this have? How does this affect the future of Myanmar? What impacts are we seeing from the people of Myanmar fighting back?

“Thanks to the social media, we have opportunities to share what is happening in Myanmar along with the other people around the world. We request for help from other powerful countries to stop this ruthless act by the military coup which is the violation of the human rights. The future of Myanmar solemnly depends on the youth for they are the hope for the future to fight against the military junta. What is going to happen next is still unpredictable as expected things can possibly occur. The youth of Myanmar are fighting back against the junta. However, it is very risky for the young people as the junta has weapons and bombs. The KNU(Karen National Union) is also fighting against the military and have seized several weapons from the junta. People of Myanmar put faith in them to win over the military and hopefully perish the entire system of this toxic and murderous military junta.”

What do you think about local and international media outlets’ coverage of the military coup?

“To be more precise, the military junta media channels such as MWD and MRTV give out the fake news and false information to try to deceive people into thinking that they only have the right source. On the other hand, other news channels such as Mizzima, DVB and Ayerwaddy try their best to update us with real news of current military junta’s actions regardless of death threats and reporters on a lookout by the soldiers. Sadly, there are more reporters who have been captured by the military coup to prevent spreading the accurate news. Honestly, there are also many other urban areas in Myanmar where they have no access to the internet or media outlet. There are numerous unreported deaths and brutalities the military junta has done that has not been fully reported to international media.

I think that the international media does provide precise news but the updates and flow of the news is slowly fading due to the fact that the junta has cut off the internet access. As a result, I am afraid that people from other countries won’t be able to hear our voices anymore.”

“The military junta’s brutality is far worse in this time compared to 1988. They already have a horrible reputation of massive genocide towards the innocent citizens and their selfish acts of selling the natural resources illegally for their own profit. The crisis has caused all the nations from Myanmar to unite and fight against this military junta, having the same goal and same motivation in each of our minds for freedom. This is a revolutionary era led by the youth of Myanmar which will always be written in history and shall never be forgotten.”

If you had one message you hope to reach anyone who reads this interview on the Myanmar crisis, what would it be? In other words, what do you hope people in Myanmar or outside of Myanmar take away from this?

“I would like to simply give a positive message as I understand that all of us are already struggling since the pandemic outbreak. People of Myanmar, please don’t give up. We will certainly get back our freedom through our bravery, union and strong will to keep fighting regardless of our ethnicity, backgrounds and race. No matter what ways you are fighting whether from your phone, protesting in Myanmar or even outside of Myanmar, we shall win this fight.  I hope that people who are not from Myanmar should also try to give us strengths by sharing the news and lending us a hand to fight back against this military junta. We all should unite to save each other to destroy the evil.” 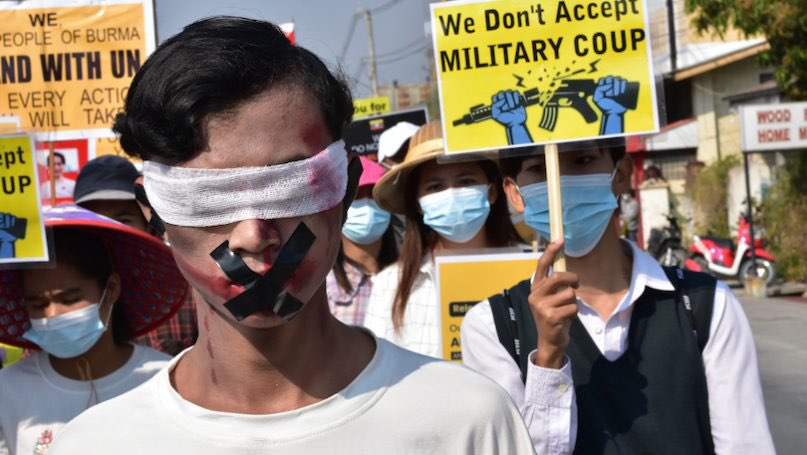